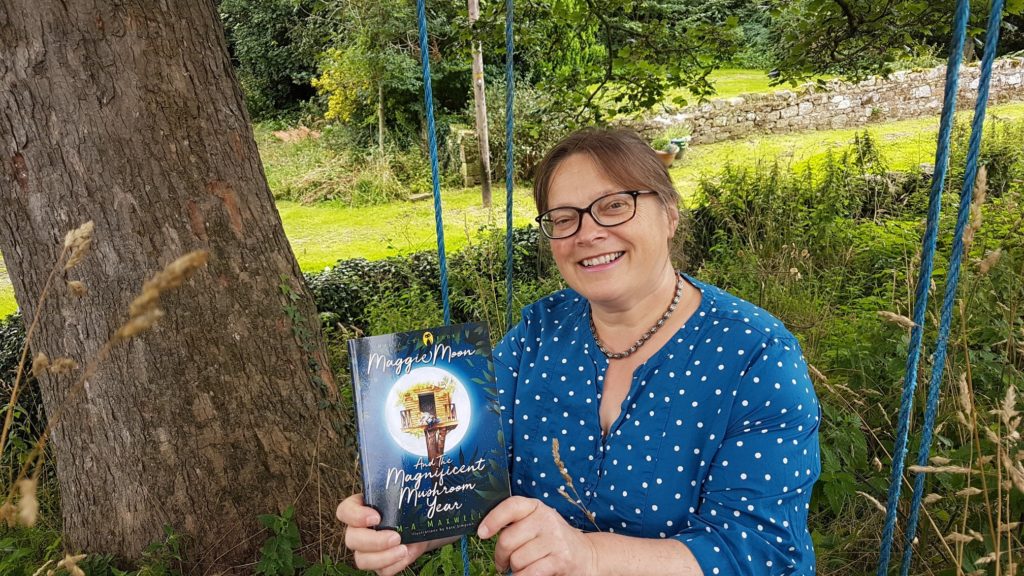 Margaret-Ann Maxwell (aka Mrs Cheese) has announced today that she is to launch her first novel at Glendale Show on Bank Holiday Monday.

Donald Trump sound-alike as the Bad Guy, Northumberland’s natural environment, and foraging delights feature in a tale of twists and turns, mystery and adventure, in a new children’s novel written by our own local cheese maker in aid of her favourite school.

“Maggie Moon and the Magnificent Mushroom Year” is a children’s book, aimed at 8 to 11 year olds, and promises a tale of outdoor adventure set in the Northumberland countryside Margaret-Ann was brought up in. The plot features a girl and her faithful sheepdog, a villainous developer named Ronald Crump, quests, mystery and mayhem, and of course many delicious dishes! It incorporates the author’s passion for the natural environment, the landscapes of the local area and her love of trees, foraging and food – especially cheese!

The novel costs £6.99, and all proceeds will be donated to Glendale Middle School, where Margaret-Ann started out.

As we know Margaret Ann was born and bred in Doddington, near Wooler in Glendale, Northumberland, and although this countryside tale is not a real-life story, it is inspired by real events. Her story is 100% committed to her family roots and exudes Glendale at every turn of the page.

Giving further background Margaret-Ann said: “I’ve been keeping various notebooks and ideas for the book for many years, but it was four years ago that I felt the need to put pen to paper, and it became a labour of love. I was one of the first to attend Glendale Middle School and have very fond memories of going there, so from the outset my aim was to write a book that would give something back to the school that is the backbone of our community here in Wooler.

“This tale is for children, set in their own area where they live and learn.”

For its author, another special feature of the finished novel is that every aspect that has gone to create the book itself has used local talent and local industry. On choosing who got involved in the production of the book, Margaret-Ann adds:

“It was based in the local area so it was important to me that we supported local people. Everyone concerned is rooted on our doorstep, which is very in keeping with the story. Written by me in Doddington; the artwork was created by local artist Kate Simpson; the wonderful cover design was kindly donated by Lazy Grace, and the proof-reading was done in Lowick. It was type set in Tweedmouth, printed at Martins the Printers in Spittal, and the initial print run will be available at Geo C Grieve in Berwick-upon-Tweed, The Cheese Room in Alnwick, Florin in Wooler along with Doddington Dairy’s Milk Bar.”

The book features wonderful illustrations by renowned illustrator Kate Simpson, along with the adventures of Alice the Truffle Pig, the foraging of Monsieur Foray and Ronald Crump the Bad Guy Developer.

On reading the book, John Huddart, former Assistant Head at Berwick High School and a writer himself said:

“Margaret Ann as an author for children is a cross between Roald Dahl and, from a foody perspective, Nigella Lawson! It is a story of young heroes and old villains and the magic of the countryside, and anyone who loves and lives in Northumberland will recognise it instantly. It’s a page turner for kids, and mums and dads will love reading it as well, if only for the delicious recipes.”

“As teacher all of my life, it is heartening to see someone realising an ambition to write and entertain others with their skill, and of course to put all of the proceeds into her local school.”

This website uses cookies to improve your experience while you navigate through the website. Out of these, the cookies that are categorized as necessary are stored on your browser as they are essential for the working of basic functionalities of the website. We also use third-party cookies that help us analyze and understand how you use this website. These cookies will be stored in your browser only with your consent. You also have the option to opt-out of these cookies. But opting out of some of these cookies may affect your browsing experience.
Necessary Always Enabled
Necessary cookies are absolutely essential for the website to function properly. This category only includes cookies that ensures basic functionalities and security features of the website. These cookies do not store any personal information.
Non-necessary
Any cookies that may not be particularly necessary for the website to function and is used specifically to collect user personal data via analytics, ads, other embedded contents are termed as non-necessary cookies. It is mandatory to procure user consent prior to running these cookies on your website.
SAVE & ACCEPT